February 19th, 2018 -Marvel’s latest box office behemoth, Black Panther, is a bona fide cultural phenomenon. African-American audiences, in particular, have overwhelmingly embraced the tale of the titular superhero and sovereign of the fictional African nation of Wakanda. Unfortunately, but not unexpectedly, reports of the movie exceeding all hype have spawned a blacklash in some of the whitest corners of the Internet.

Sold-out screenings full of fans decked out in African garb have prompted an ugly smear campaign by online trolls against the film. While social media platforms are bursting with praise for the action-packed and politically provocative comic adaptation, some users are posting images of battered white people whom they claim were assaulted while trying to attend Black Panther.

Darnell Hunt, Dean of Social Sciences at UCLA, was quoted in the LA Times about the root causes of the racist pushback against Black Panther, which is only the second major movie release fronted by a black protagonist after 1998’s Blade:

“We live in very polarized times…There have been rumblings on message boards about white superheroes being reimagined as black superheroes. There is clearly concern from those who are worried about the changing demographics of the country.”

Users from anonymous and unverified social media accounts posted a series of either fake or misrepresented photographs of men and women with gruesome injuries allegedly suffered at the hands of Black Panther fans. In one case, a photo of a man whose face appeared severely bruised turned out to be a set photo of an actor in makeup for a fight scene for his popular television series, Supernatural. Another user pulled a photo of Colbie Holderness, the ex-wife of former White House staff secretary Rob Porter who was credibly accused of domestic violence.

I was so excited to see #BlackPanther and a young black man at the theater shouted “you in the wrong place, cracker!” And proceeded to bloody my face. It hurts so bad I can’t take it! pic.twitter.com/fTwoROQDhV 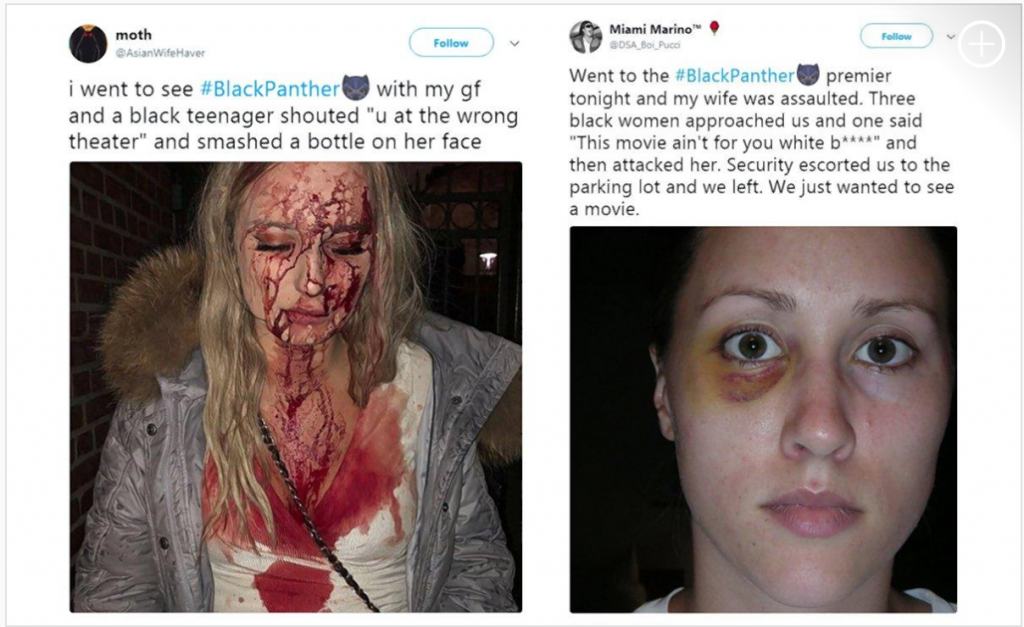 Despite these dimwitted attacks, audience enthusiasm for Black Panther is showing no signs of abating with community groups and celebrities buying out theaters for fans and moviegoers – reportedly paying for multiple viewings during opening weekend. James Gunn, director of Marvel’s last breakout franchise, Guardians of the Galaxy, took to Twitter to speak out against the divisive and hateful falsehoods and voice his support for the film.

The racists are out and rearing their ugly heads with lots of fake tweets about violence at #BlackPanther screenings. In truth, people from all walks of life have been enjoying the film together this weekend. Don’t let this BS scare you away. ❤️ https://t.co/CSdlcpVuPp


.
No Thank You
Posted in:
Tags:Black PantherMoviesRacismTrollstwitter
Share this article
previous article
The Funniest Faces Of The 2018 Winter Olympics
next article
A Conversation with The Sklar Brothers About Humor