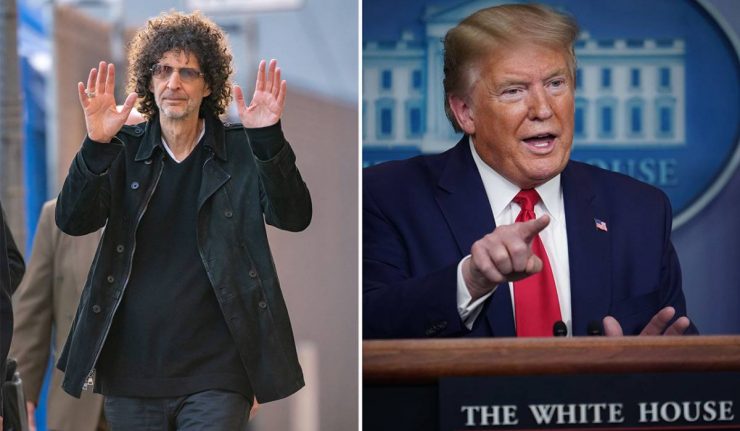 April 29th, 2020 – Howard Stern returned to his SiriusXM show on Monday after taking a week-long break, and he obviously spent some of that time watching Donald Trump’s press conferences. Stern came ready to unload on the president for suggesting that injecting disinfectants could be a cure for COVID-19. His ultimate takeaway: let Trump and his supporters take a Clorox shot and drop dead.

Stern had previously listed Trump as “one of the top five guests” on his show (and largely identifies with the Republican party), but the president’s erratic behavior over the years has lead the radio personality to publicly disagree.

This time, however, many people thought the shock jock’s D.C./Jonestown musings went too far.

“I would love it if Donald would get on TV and take an injection of Clorox and let’s see if his theory works,” Stern said during his Monday show. “Hold a big rally, say fuck this Coronavirus, with all of his followers, and let them hug each other and kiss each other and have a big rally.”

“Yeah, and all take disinfectant and all drop dead,” Stern said.

After a day of intense media coverage, medical professional rebuttals, and endless mockery, Trump backpedaled on his suggestion saying he was simply being “sarcastic.” Video shows the president earnestly looking at doctors on the Coronavirus task force and asking them to look into options. “Because you see it gets in the lungs and it does a tremendous number on the lungs. So it would be interesting to check that,” Trump said.

Stern didn’t backpedal. He insisted he wasn’t being political; just simply calling out the insanity. After a caller from New York asked him to quit talking politics, Stern argued that staying alive isn’t a political position.

During Tuesday’s show, Stern doubled down on his statement after seeing that his words traveled far past those with Sirius subscriptions.

“So I cranked up a whole shit storm yesterday…I saw the Daily News picked it up, it was all over the Hollywood Reporter,” he said. “I stand by my statement. I said wouldn’t that be great if the president would get up and do that then all of his legions, all of his followers, who treat him like he’s the messiah, they should all do it, too. That way they can see if it works.”

Stern also went on to counter arguments from those offended by his comments. He asked people to be more outraged at a president who uses a press briefing to perform medical improv during a global pandemic than a radio personality using sarcasm.

As of yesterday, the CDC reported there have been 981,246 cases of COVID-19 and 55,258 deaths in the United States since February.

Do you think Howard Stern’s suggestion that Trump and his supporters take disinfectants and drop dead was Funny or Offensive? Vote and comment now…