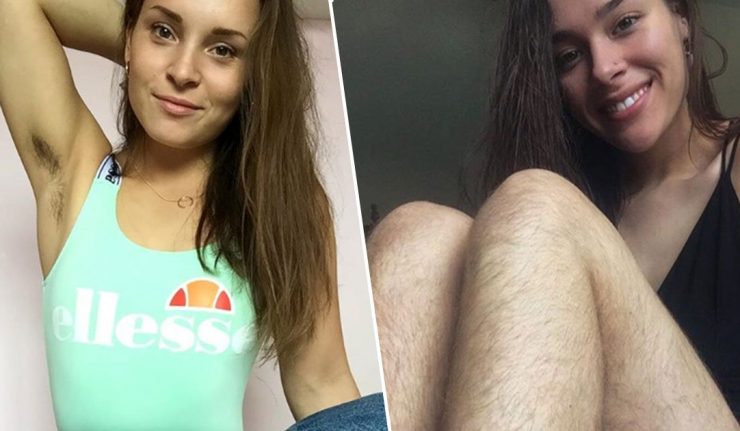 “Embrace your body in all its authentic glory.”

January 10th, 2019 – If your 2019 vision board happened to have a clump of body hair next to a photo of gym equipment, then we have just the movement for you: Januhairy. Men have “No Shave November,” and now women have a hair-growing month as well thanks to Laura Jackson. The 21-year-old drama student got the idea after growing out her own body hair for a performance at at the University of Exeter in the U.K.

Jackson took to Instagram last month to announce the initiative saying that the unaccepting attitude toward body hair on females has made many women become unfamiliar with their authentic selves. She also announced that the additional hairs would not only raise confidence but funds for a charity called Body Gossip, which uses art and education to empower people to be the best version of themselves.

“Welcome to Januhairy! The acceptance of body hair on women is unfortunately still a predicament. We are displayed in the media as feeling ‘confident’ when our legs are smooth, eyebrows plucked, armpits waxed etc.,” Jackson explained in the post.

Welcome to Januhairy! The acceptance of body hair on women is unfortunately still a predicament. We are displayed in the media as feeling ‘confident’ when our legs are smooth, eyebrows plucked, armpits waxed etc. Society seems to be behaving as if the natural hair we grow on our bodies is unattractive and distasteful. We are so used to removing our body hair that we are becoming unfamiliar with our authentic selves. Januhairy, is an experiment for women to come together, encourage one another, and be sponsored to grow out our body hair for the month of January. All too raise money for the charity, ‘Body Gossip’! #januhairy #bodyhairmovement #happyandhairy #loveyourbody #thenaturalrevolution #hairywomen #womanpower #selflove #feminine

Women are encouraged to share photos and stories of their Januhairy journey and supporters are being asked to sponsor the no-shave commitment. Jackson created a JustGiving page where people can donate toward her target goal of £1,000 for Body Gossip. The initiative has currently raised over £800 with kind comments also being donated.

“This is very cool and a worthwhile cause. Absolutely nothing wrong with girls going for the natural look. I’ve donated £10 plus an extra £6 to counter all the negative comments (men and women)!!,” Phil Green, a man who contributed, said on the page.

Jackson is all too familiar with negative comments. While she was growing out her body hair for the college drama performance, she said several people looked down on her for ditching the razor.

“After a few weeks of getting used to it, I started to like my natural hair,” she wrote. “Though I felt liberated and more confident in myself, some people around me didn’t understand why I didn’t shave/didn’t agree with it.”

Her mother even expressed dismay when she told her about the idea for Januhairy – asking questions such as “Is it you just being lazy or are you trying to prove a point?”

In an Instagram post introducing herself to followers, Jackson shared that after talking more in depth with her mother she realized how weird it was to even ask those questions. Mama Jackson is now tossing the razor for Januhairy, too.

Hi I’m Laura, the gal behind Januhairy! I thought I would write a little about my experiences and how Januhairy came about… I grew out my body hair for a performance as part of my drama degree in May 2018. There had been some parts that were challenging for me, and others that really opened my eyes to the taboo of body hair on a woman. After a few weeks of getting used to it, I started to like my natural hair. I also started to like the lack of uncomfortable episodes of shaving. Though I felt liberated and more confident in myself, some people around me didn’t understand why I didn’t shave/didn’t agree with it. I realised that there is still so much more for us to do to be able to accept one another fully and truly. Then I thought of Januhairy and thought I would try it out. It’s a start at least . . . I have had a lot of support from my friends and family! Even though I had to explain why I was doing it to a lot of them which was surprising, and again, the reason why this is important to do! When I first started growing my body hair my mum asked me “Is it you just being lazy or are you trying to prove a point?” . . . why should we be called lazy if we don’t want to shave? And why do we have to be proving a point? After talking to her about it and helping her understand, she saw how weird it was that she asked those questions. If we do something/see the same things, over and over again it becomes normal. She is now going to join in with Januhairy and grow out her own body hair which is a big challenge for her as well as many women who are getting involved. Of course a good challenge! This isn’t an angry campaign for people who don’t see how normal body hair is, but more an empowering project for everyone to understand more about their views on themselves and others. This picture was taken a few months ago. Now I am joining in with Januhairy, starting the growing process again along with the other wonderful women who have signed up! Progress pictures/descriptions from our gals will be posted throughout the month. Lets get hairy 🌵 #januhairy #bodygossip #bodyhairmovement #happyandhairy #loveyourbody #thenaturalrevolution #natural #hairywomen #womanpowe

While plenty of people have flooded Instagram posts with jokes, condemnation, and “disgusting” comments, Jackson pushes back with photos and stories of women enjoying the discovery of confidence through natural beauty. She continues to remind people that the opinions that matter are the ones coming from people who are learning about themselves.

“This isn’t an angry campaign for people who don’t see how normal body hair is, but more an empowering project for everyone to understand more about their views on themselves and others.”

“There is nothing more rare, nor more beautiful, than a woman being unapologetically herself; comfortable in her perfect imperfection. To me, that is the true essence of beauty.”~Steve Maraboli • • • @i_am_morgie~ “…Imagine if everyone just decided that today was the day they loved themselves and embraced every part of them selves. Accepting and loving your body and your “flaws” because you know they are what makes you who you are. If you are focused on being true to yourself in every moment, you are less concerned what others think, which will lead to peace of mind. When you have nothing to hide and you can freely be yourself, there is a profound peace/confidence you will emanate to the world that will inspire others.”👏 • • • All the girls joining in januhairy are shaving off their body hair on New Year’s Eve (Monday 31st) ready to kick start the new year with a new challenge! We have many women who have signed up for this charity project so far, from the age range of 16-60! ✨💃✨💃 Sign up and join in while you can! #3daysleft #januhairy #thenaturalrevolution #bodyhairmovement #bodypositive #spreadlove #behappy #namaste#hairywomen #healing #healthylifestyle #selfcare #loveyourself #beyourself #bethechange #divine #inspireothers #inspirationalquotes #positivity #goodvibesonly #lifeisbeautiful #hairy #gratitude #weareone #higherconsciousness #freespirit #empowerment #smile #feelgood #bodygossip

GOOD MORNING LADIES! Over the next few days we will be introducing you to some of the beautiful ladies taking part in januhairy. Today we have the gorgeous @fenellafox and here is her story. “I’ve been in the modelling industry since i turned 18 and the last 5 years haven’t shaved my legs and 2 years haven’t shaved my armpits – i’ve lost a lot of income and gained death threats from displaying my body hair publicly and regularly am told it’s disgusting to let my body do its natural thing and not remove the hair ❤ i feel like i’m constantly fighting some weird gender norm battle and would love more people on my side following me ☺✨✨” – To share your #januhairy story, send us a DM or email us at januhairy@hotmail.com!

Loving these empowering illustrations by @yourewelcomeclub Check out their page and all it’s wonderful queerness. The last illustration is of the inspirational role model for body positivity, @harnaamkaur Sign up while you can! #5daysleft #januhairy #inspiration #bodyhairmovement #happyandhairy #loveyourbody #thenaturalrevolution #natural #hairywomen #womanpower #selflove #feminine

An illustration from the amazing book “unladylike”.. @tylerfeder • • • All women should feel comfortable, confident, and accepted, in whatever state they choose to be. That, and have no other woman or man judge them for that choice. That would be a nice change, wouldn’t it? This project isn’t to encourage women to be hairy forever, it’s to prove to ourselves and others that there is no strict definition of normal. Januhairy is just around the corner! 🌵 #januhairy #bodygossip #unladylike #signup #bodyhairmovement #happyandhairy #loveyourbody #thenaturalrevolution #natural #hairywomen #womanpower #selflove #feminine

What do you think about Januhairy? Do you see it as a creative way to push back on gender expectations or are you Team Razor?