The Best Burns from the Alec Baldwin Comedy Central Roast 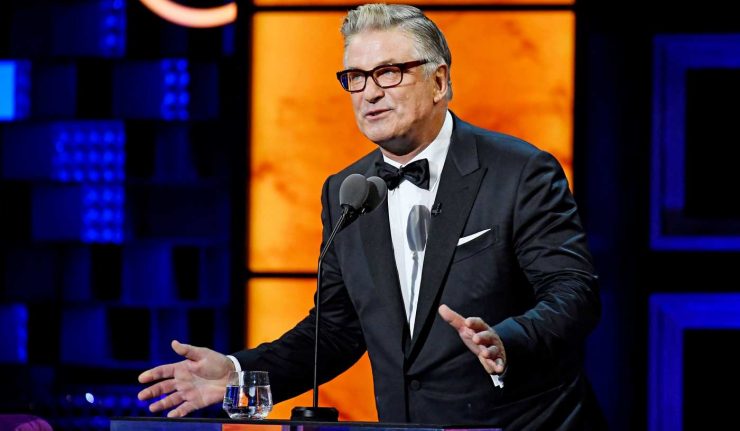 September 10th, 2019 – Move over, Chrissy Tiegen. The “filthy mouthed” Twitter queen can pitch Comedy Central on the roast of “pu**y ass bitch” President Trump next year. Right now, all eyes are on Alec Baldwin as he took to the dias to be roasted by comedians who were more than ready to tackle the actor’s anger issues, his very young wife, and many other tabloid front-pager stories over the years.

The 30 Rock actor, whose most noted recent credit is playing President Trump on Saturday Night Live, was burned by a cast of regulars including Jeff Ross, Nikki Glaser, and Adam Carolla, as well as new arrivals Robert De Niro, Caitlyn Jenner, and Blake Griffin — with Sean Hayes serving as roast master.

“I promise this will be the funniest thing you’ve been a part of that Tina Fey didn’t carry you through,” Hayes quipped.

While the seasoned comics were able to land some pretty hard blows, some of the most brutal hits came from Baldwin’s daughter, Ireland. The 23-year-old referenced the notorious voicemail her father left her when she was a child calling her a “thoughtless little pig.” She went on to drill him on being absent, harsh, and, well, not Kim Basinger.

“It’s good to be here. I almost didn’t even know about it because I haven’t checked my voicemails from my dad for the last, like, 12 years,” she joked. “I actually have a lot in common with the people on this roast because, like them, I don’t really know you that well either.” She knows him better as “the guy from like, half of my birthday parties.”

“It hasn’t been easy being the daughter of an iconic movie star, but I’m not here to talk about my mother,” she said. “Or her Oscar. Or her continued respect in this industry.”

The taped event lasted well over three hours at the Beverly Hills landmark Saban Theatre. Guests were treated to gift bags full of treats including “Chocolate Schweddy Balls,” a tip of the hat to one of Baldwin’s most famous SNL sketches. For those not in attendance, you can watch an edited version on Comedy Central Sept. 15 at 10 p.m. ET.

In the meantime, take a look at some of the best lines from the evening targeting Baldwin and the roasters themselves.

Sean Hayes: “Thank you for having me…is something your kids will never say.”

Triumph the Insult Comic Dog: “What was it like to play Trump?” Triumph asked. “All that anger. All that narcissism. How did you dial it down?”

“What most people don’t realize is that, for the last three years, Trump has been doing an impression of Alec Baldwin,” Jeff Ross added.

More from Ross: “Alec, I saw you in the movie Pearl Harbor, which was worse than the actual Pearl Harbor!””

“I watched you get arrested for pummeling a guy over a parking space. Next time, why don’t you just valet your car and help out your brother’s business?”

On Baldwin’s Trump impression: “It’s more tired than the guards who slept through Jeffrey Epstein’s suicide.”

Robert De Niro: “I once saw him take a selfie and punch his own face.”

Caitlyn Jenner: “Back when I was Bruce, we were brothers. That’s another brother you’ll never talk to again.”

A steady stream of Jokes For Jenner:

Sean Hayes: “Caitlyn, being here tonight is braver than anything you’ve ever done. But don’t worry, any parts you don’t like can be cut…give her a big hand, even though she already has two of them.”

Nikki Glaser: “Caitlyn Jenner, you’re such an incredible athlete. People forget how fast you once ran away from your first family to be on a reality show…You’re a Republican, I don’t know why. You’ve already gained control of a woman’s body. Stevie Wonder sees his sons more than you do. I know being a new mom is hard, but even Casey Anthony knows the current location of her daughter.”

Chris Redd: “Caitlyn, you’re against gay marriage. You voted for Trump. You’re like the Auntie Tom of the trans community.”

Blake Griffin (who once dated Jenner’s daughter, Kendall): “On behalf of the entire NBA and the Billboard charts, I want to thank you for giving your daughters their daddy issues.”

Ross To Carolla: “You once said women weren’t funny. Well, they are, and you should have hired some to write your jokes tonight!”

Baldwin closed out the night by returning the favor saying:

“I love all of you. If you don’t believe me, check your voicemails.”

Did you feel the love during this roast? Were the jokes Funny or Offensive? Vote and comment now…