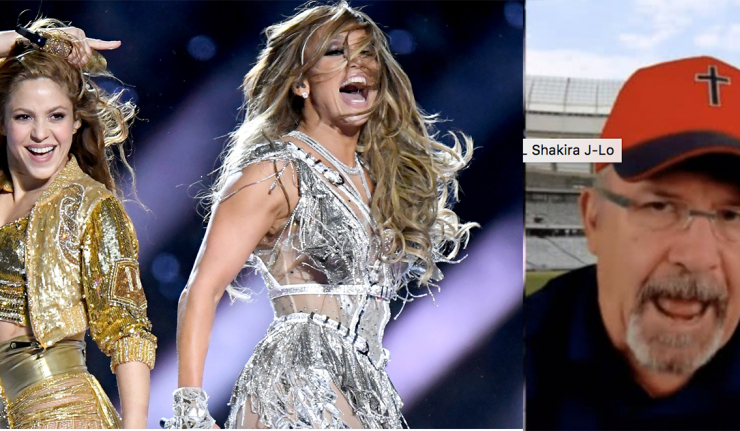 February 7th, 2020 – Hell hath no fury like a right-wing Christian activist horned (up.) Dave Daubenmire, a middle-aged many who makes videos with titles such as “We Have Got To Re-Stigmatize Homosexuality” and “Bigot Is The New ‘N-word,'” lost his mind during the Super Bowl half time show. It wasn’t because he missed a shirtless Adam Levine from last year but because Shakira and Jennifer Lopez showed off “crotch shots.”

In addition to, what has to be, lots of prayers coming from his mouth, he also informed followers that he plans on suing the NFL, Pepsi, and local cable companies for putting him “in danger of hellfire.” During his “Pass the Salt” podcast, Daubenmire shared that he was upset there was no warning and he worried for pre-teen boys who might have gotten a little too excited.

“I think we ought to sue,” he said. “Would that halftime show, would that have been rated PG? Were there any warnings that your 12-year-old son—whose hormones are just starting to operate—was there any warning that what he was going to see might cause him to get sexually excited?”

He’s calculated the damages and figures that $867 trillion should rectify the gyrating situation.

Shakira and J-Lo’s halftime show drew criticism as soon as the two iconic performers hit the stage. Tweets blasting their twerking and outfits made the rounds just as J-Lo performed on a pole, but nobody really brought the court system into the conversation.

“I think we ought to go sit down in a courtroom and present this as evidence of how whoever [put on the halftime show] is keeping me from getting into the kingdom of Heaven,” Daubenmire said. “Could I go into a courtroom and say, ‘Viewing what you put on that screen put me in danger of hellfire’? Could the court say, ‘That doesn’t apply here because the right to [produce] porn overrides your right to [not] watch it’? Yeah, well, you didn’t tell me I was gonna watch it! You just brought it into my living room. You didn’t tell me there were gonna be crotch shots!”

Dave Daubenmire Is Looking to Sue the NFL for Putting His Eternal Salvation at Risk Via the Super Bowl Halftime Show from Right Wing Watch on Vimeo.

Daubenmire, a resident of Ohio, says he feels the airing of such a risqué performance is “discriminatory” against the values he has in his house, although he did admit to turning the show off until Shakira and her hips stopped being so honest. In a fit of anger, he also declared the halftime show unfair because why are two Latina artists allowed to dance like that and he can’t even “talk about homos on Facebook.”

No lawsuit has currently been filed, but Daubenmire did make another video about the “debauchery.” On Monday, he shared a video on Facebook where he said he was looking for a lawyer in order to sue for “pandering pornography” and “contributing to the delinquency of a minor.”

“I’m serious as a judge here. I’m looking for a lawyer out there, somebody who will join me in a class-action lawsuit,” he said. “What we saw yesterday was a strip club performance…Are we going to protect our children or not?”

Do you think Dave Daubenmire has a valid point in suing the NFL for Shakira and J-Lo’s Super Bowl halftime show or is he just trolling us all?